Confrontational art proved itself alive and well at California State University Channel Islands, where the Art Department sponsored an installation and accompanying performance by Gary Lloyd last Thursday, March 13, in a small gallery at their Camarillo campus. “They: An Answer Driving the Problem, Revisted” took an updated look at work that has preoccupied the artist for many years, in an “interactive multimedia exhibition probing climate change and the impact of technology.”

“They,” as the exhibit and the artist’s gloss make clear, is actually “Us.” The human species. The overwhelming evidence—a good deal of it documented through a variety of media in the current show—is that our planet is in serious trouble. With species disappearing at alarming rates, the ice cap melting, droughts, floods and fires in many parts of the globe, and so on—it’s a depressingly familiar list–the preponderance of credible science tells us that we are in danger of rendering the earth uninhabitable before the end of this present century. Worse, we are rapidly approaching the tipping point beyond which all human efforts will be in vain. This dire situation is compounded by the stranglehold in which the global ecosystem is held by corporate powers whose priority is profit, not the welfare of the Earth.

Lloyd is convinced that we, the people of this planet, have “the answer”, if only we can find the will to use our technology in ways that benefit the earth rather than exploit it. The technology, he insists, is simple, user-friendly, and as close to hand as a smart phone. His performance gave him the opportunity to demonstrate his thesis, using Skype to instantaneously link like-minded people in China, Southern California and New York, in texts delivered in Mandarin Chinese and Spanish as well as English, in an offhand display of already ubiquitously existing systems we can use to facilitate communications and deploy our critical human intelligence in the resolution of our common problems.

Intertwined with the communications issue is that of our energy consumption—and that’s not only the fossil fuels we Americans devour in vastly greater quantities than are our share as global citizens, but also the source of protein we use to fuel our bodies: meat. The freeze-dried “meat axe” Lloyd created many years ago makes its doleful reappearance in the current show, reminding us of our ancient dependence on this food, and the only recently understood effects of its attendant demands on our natural environment. Juxtaposed with his curiously “primitive” use of advanced technology, Lloyd’s trademark axes, skulls, and dug-out “book boats” remind us of the early roots of our human technology, and of the relatively short journey on which it has led us to wreak such havoc on the planet we inhabit.

Conscious that his performance was addressed primarily to college-aged art students, the artist was at pains to leave them a coherent, urgent and incontrovertible message: “I’m committed to this work; the planet expects—demands—no less of you.” The performance ended on a deeply personal, confessional note, whose emotional intensity was unmistakable. The father of two teenage boys, Lloyd made clear the responsibility he feels not only to the fragile and sorely tested Mother Earth, but to the family that is his own natural heritage. It’s a responsibility that he poignantly required his audience to share. 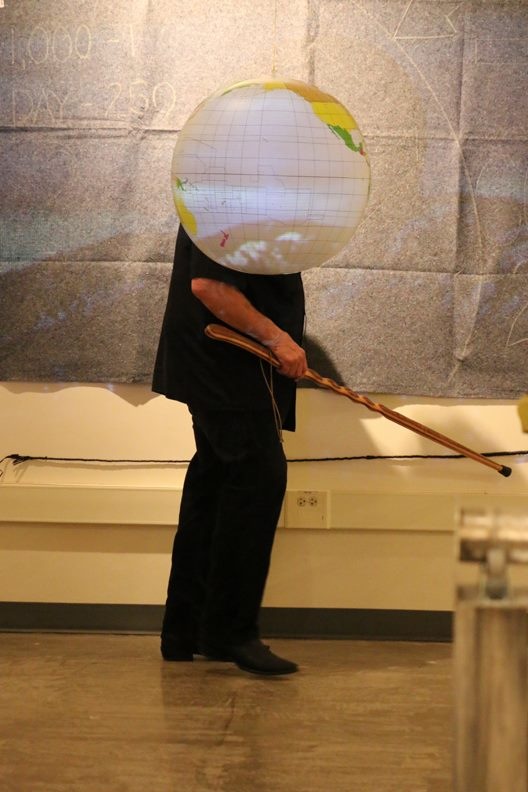