I was delighted, a while ago, to be invited by Berenson Fine Art in Toronto to write a catalogue text for Aleksandar Antonijevic, a principal dancer with the National Ballet of Canada who is also a remarkable photographer.  I had planned not to publish the text until it was published by the gallery, but have received a request from both the gallery and the ballet company to publish it on The Buddha Diaries, which I now do with pleasure.

THE BODY
By Peter Clothier 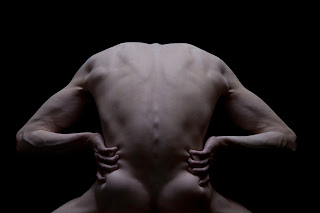 The body.  This is the vehicle we are given at birth, in which to move about the world and make our connection with our fellow travelers.  We cherish its finer points and chide ourselves for its imperfections.  We admire fine human bodies when we see them—and compare ourselves to them with envy.  We fall in lust with them: our bodies desire other bodies.  Yet we fear our body’s vulnerability to sickness and age, wishing it to be perfect and immortal.

We are, of course, more than our bodies, but that does not prevent us from identifying with them.  My body is mine.  It is me.  It is who I am.

Given its importance to the human psyche, then, it is hardly surprising that we humans share the impulse to idealize the body.  Our Western artists have done this throughout history, from the great classical Greek and Roman sculptors to the Renaissance.  Think of Michelangelo’s “David,” that paean to the ideal form of young masculine beauty, as powerful today as it was centuries ago.  More recently—beginning, we may think, with Caravaggio—our artists have been at pains to make it real, to show the body and the face of real people with real, individual features and real emotions.  Think of Rodin.  In photography, think of Robert Mapplethorpe.  All modernist abstract movements notwithstanding, the human figure remains the great challenge for artists in all media concerned with this profoundest of all questions: what does it mean to be a human being?  In what does our humanity consist?

As a photographer—and this is an artist who previously built a fabulous reputation in another medium: dance—Aleksandar Antonijevic concerns himself with both the aesthetic and the emotional answers to these questions.  (Each “answer” is, of course, provisional, but that’s another matter…)  His images reveal to us, at first sight, the breathtaking beauty of the human form in its perfection; and the dramatic beauty of its ability to reach the absolute limits of its potential.  With subtle insistence, he shows us the powerful and elastic muscularity of the limbs and torso, the erotic appeal of flesh and skin, the sensual flow of hair.  He invites us into the most intimate places of the human anatomy and makes them a matter of pure line and contour.  As viewers, we are enchanted by the chiaroscuro, the play of light and dark, the mysterious, quasi-minimalist abstract forms created by those draped figures, tensed against the drapery that enfolds them.

So much for the sheer beauty of the thing.  But as the French poet Baudelaire suggested, pure beauty can be cold and imperious, counting for nothing but itself.*  So it is of importance that Antonijevic also reveals the vulnerability, the ultimate ingredient of our humanity, that lies beneath the skin.  Consider the complex dynamics of relationship in those images where he chooses to present two, twin figures, like magnets, at once attracting and repelling each other.  Consider those images where drapery flows with the disturbance of movement, or clings uncomfortably to flesh.  Consider, where he chooses to show them, the faces of his subjects, which sometimes painfully reveal precisely that which they would seem intent on hiding. 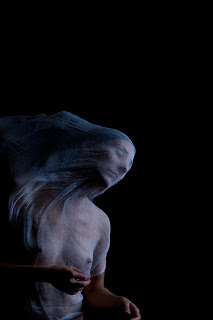 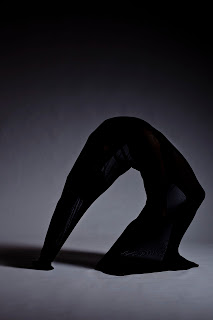 This will explain why Antonijevic’s pictures are not simply beautiful, but moving.  They engage us in the drama of their imminence: they capture, yes, the present moment, the moment frozen and distilled by the action of the camera; but that captured present moment is always trembling at the very edge of future.  These still, often vertiginously isolated figures ask the eye to imagine where the pull of gravity will inevitably take them next, bringing them “back to earth” from the exalted realm of their perfection.  In the meantime, though—and to our profound and heart-felt pleasure—we earthbound creatures can experience through their example something of the pure ecstasy of levitation, of freedom from the dominion of the ground.